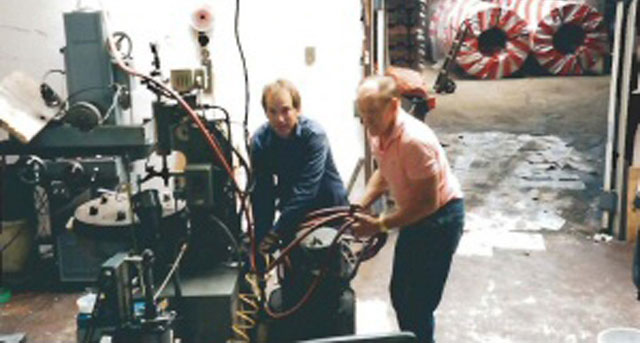 Dave Arand and Clarence Arand working on equipment around 1993 at Downtown Cincinnati location.

Matdan Corporation was founded in 1992 with the mission of designing and manufacturing captive fasteners and custom hardware of the highest quality. With this commitment to quality driving company policy, Matdan has become a recognized leader in fastening technology throughout the industry.

Prosperity turned into dramatic growth with the economic boom of the mid-1990’s and Matdan was successful in developing alliances with key industry OEM’s and Contract Manufacturers. Significant growth in the Computer, Networking and Telecommunications industries spurred this growth which included mass production of servers, computers and telecom equipment.

Since this time, Matdan Corporation has been able to leverage industry expansion to continue to broaden its product offering for the Aviation, Marine, Military and Transportation industries.

Today, Matdan products are sold throughout North America and in in many other markets including Europe, South America, Asia and Australia.